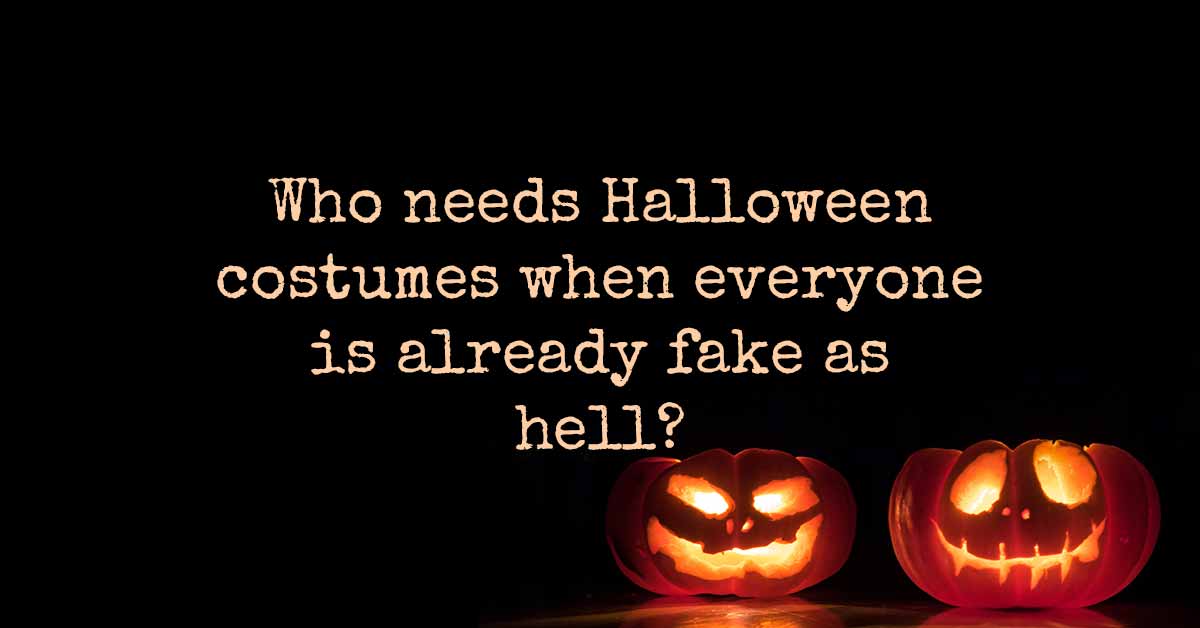 Did you know it actually hails from Ireland?

Halloween is truly one of the oddest, coolest, weirdest holidays on the calendar.

What other holiday combines kids being given gobs of candy, adults in sometimes-questionable costumes, ghosts and witches and horror movies and the fear of the undead, and more black and orange than one ever sees otherwise.

I’m really excited to write this cool little listicle for you. The other day I was walking to the bus stop and saw a dead man lying on the ground in one of my neighbor’s front yards. As I was trying to figure out how to scream, my eyes scanned around to see all the fake cobwebs, scarecrows and the mini day-glo cemetery on the side of the yard.

My favorite Halloween costume as an adult was a zombie rock climber: I’m already a rock climber so I have all kinds of gear that clanks loudly when walking about, and I attached a piece of rock to my head as though protruding from my skull, and lots of blood and pancake white makeup, and stormed around bars in town, scaring the daylights out of people. It was great.

That said, without further ado, a witches’ brew of facts about our oddest and, to many, most cherished of holidays:

1. In the early days of Halloween traditions, you had to dance for your treat. Some kids -and adults!- would show up at every house with a choreographed dance, even!

2. ”Halloween” is actually short for “Hallow’s Eve” or “Hallow’s Evening” and was set the day before the Christian All Saints’ Day (Nov 1) and All Souls’ Day (Nov 2) in an attempt to convert the pagans from their secular celebrations.

3. The first known mention of trick-or-treating in print in occurred in North America in 1927 in Blackie, Alberta, Canada.

4. Halloween is commonly thought to have come about as the culmination of samhain, an ancient Celtic end-of-year celebration.

5. Mexico celebrates Halloween’s alter ego on November 1 and 2 with Dias de los Muertos (“Days of the Dead”), where townspeople dress up as the dead to honor their ancestors. And to party. Definitely to party.

6. Cats are inextricably linked with Halloween. During the ancient festival of samhain, Druids would throw cats into a fire, often in wicker cages, as a precursor to divination proceedings. (As a cat owner, I take issue with this.) In fact, some cat shelters in the United States used to ban the adoption of cats near Halloween, fearing that people would adopt them to then sacrifice them. (This practice has mostly been stopped; the reasoning being that people trying to sacrifice an animal wouldn’t go to a shelter to adopt one for such purposes.)

7. Scarecrows symbolize the agricultural roots of the ancient samhain celebration.

8. Young people in the days of early modern Halloween celebrated by cross-dressing.

9. The concept of costuming was part of samhain’s deference to ghostly spirits. By dressing as a spirit, it was thought that you could fool the real spirits. Then they would ignore you and leave you alone.

10. Halloween is an extremely expensive commercial holiday, second only to Christmas.

11. The largest pumpkin ever grown was by Norm Craven, when his 836-lb record-breaking gourd was weighed in 1993.

12. Jack-O-Lanterns were originally made from turnips, beets and other tubers and then, eventually, pumpkins.

13. Black and orange are the traditional colors of Halloween as orange stands for strength and endurance and black stands for death, a reminder that the holiday originated as a celebration of the line between life and death.

15.  Halloween is celebrated worldwide. In Hong Kong, people leave out lanterns and small gifts and treats to appease the ghoulish spirits about, looking for revenge. In China, Teng Chieh is celebrated with lanterns shaped like dragons and other animals to help guide spirits home. Families leave food and water by portraits of their ancestors in their honor.

6 Ways to Kill Your Relationship