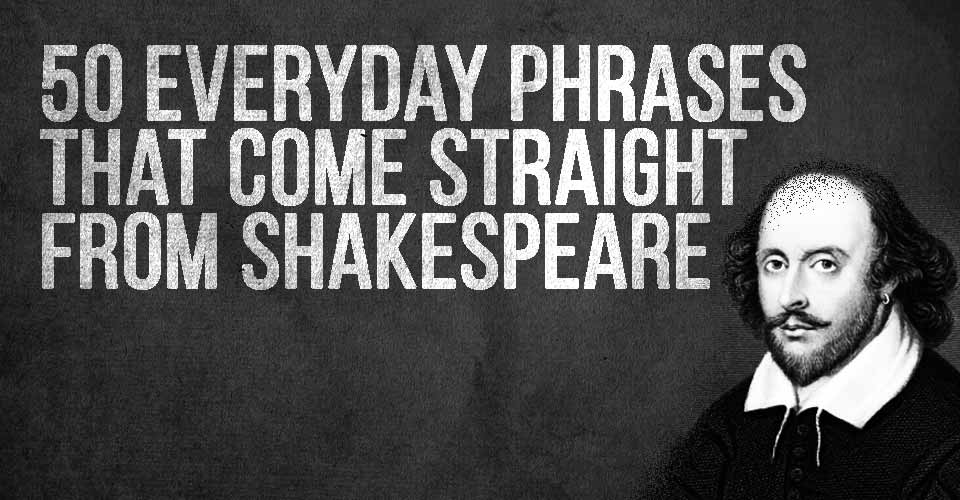 Did you know you have probably quoted Shakespeare thousands of times in your lifetime without even realising it?

Yes indeed, William Shakespeare is responsible for some of the more commonly used phrases in the English language, and regardless of how difficult some of his works may be to read through, there is never ‘too much of a good thing’ when it comes to the British bard.

So if you have ever been ‘bedazzled’, ‘in stitches’ or ‘eaten out of house and home’, this is where those wonderful phrases come from.

Its not known if Shakespeare actually invented these phrases, or if they were already in use during Shakespeare’s lifetime. In fact, it is almost impossible to identify when a word or phrase was first used, but Shakespeare’s plays often provide the earliest citation.

Here are some of the most popular Shakespeare phrases in common use today:

1. A laughing stock (The Merry Wives of Windsor)

6. I will wear my heart upon my sleeve (Othello)

9. In the twinkling of an eye (The Merchant Of Venice)

11. Neither here nor there (Othello)

14. There’s method in my madness (Hamlet)

20. With bated breath (The Merchant of Venice)

23. Such stuff as dreams are made on (The Tempest)

24. What the dickens ( The Merry Wives of Windsor)

28. Not slept one wink (Cymbeline)

30. The world’s mine oyster (The Merry Wives of Windsor)

32. Bedazzled (The Taming of the Shrew)

40. Truth will out (The Merchant of Venice)

43. There’s method in my madness (Hamlet)

45. Wear your heart on your sleeve (Othello)

One Simple Key for a Successful Relationship