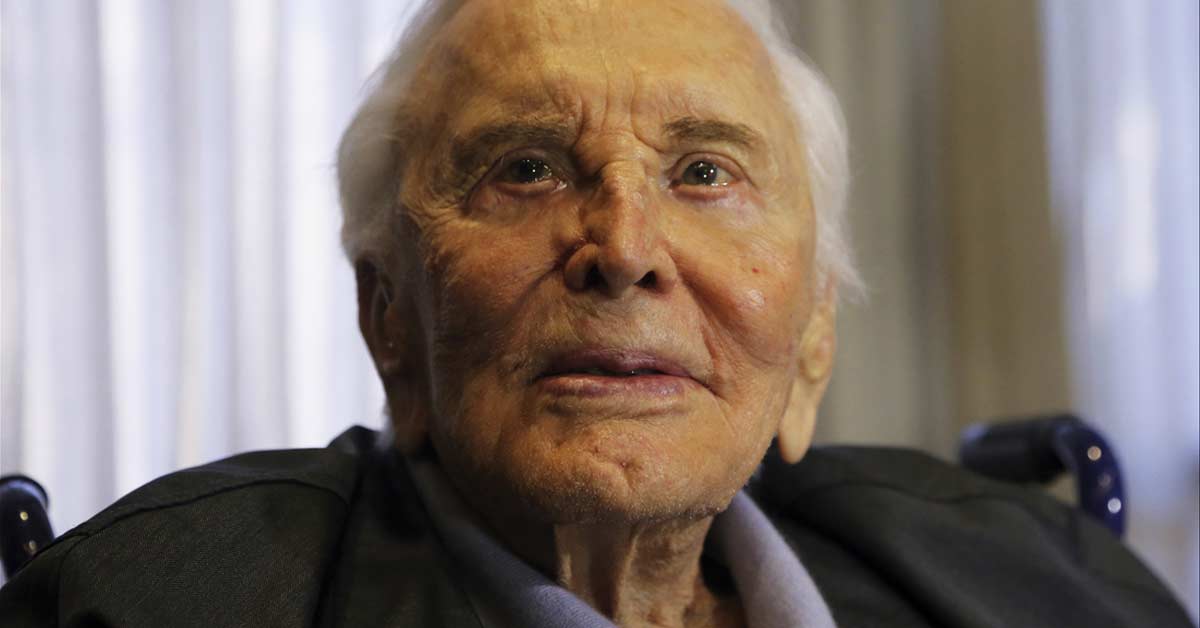 Kirk Douglas: A look back at the life of a Hollywood legend

The great Kirk Douglas, filmstar from the Golden Age of cinema, has passed away at the age of 103.

“It is with tremendous sadness that my brothers and I announce that Kirk Douglas left us today at the age of 103,” his son, actor Michael Douglas, posted on social media. “To the world he was a legend, an actor from the golden age of movies who lived well into his golden years, a humanitarian whose commitment to justice and the causes he believed in set a standard for all of us to aspire to.”

It is with tremendous sadness that my brothers and I announce that Kirk Douglas left us today at the age of 103. To the…

Born in 1916, Amsterdam, New York, Issur Danielovitch changed his name to Kirk Douglas prior to becoming part of the U.S. Navy in WW2.

Before entering the war, Douglas made his Broadway debut in the musical “Spring Again.”

After he received an injury while in the Navy in 1944, he was released from duty and went back into acting for the theater, commercials, as well as radio.

In just a few years, Douglas rose into fame and transitioned to film where he made a name for himself as a box office giant. He received his first Oscar nomination for the 1949 film “Champion,” a noir drama about the life of a boxer.

Throughout his extensive career, he acted in several hit westerns, starting with “Along the Great Divide” (1951). He also showed off his military skills in movies such as “Top Secret Affair,” “Paths of Glory” and “Seven Days in May.”

However, Douglas is most recognized for his fantastic role in “Spartacus,” (1960), for which he additionally was an executive producer. He was later also championed for his lighter role in “20,000 Leagues Under the Sea.”

"And maybe there's no peace in this world, for us or for anyone else, I don't know. But I do know that, as long as we live, we must remain true to ourselves." – Spartacus

Posted by Spartacus on Friday, 6 February 2015

The Hollywood giant received three Oscar nominations in total throughout his life, and was given an honorary Oscar back in 1996. That same year he suffered a stroke, which strongly impaired his ability to speak.

This condition never held him back from making public appearances, however. After a period of rehabilitation, which included speech therapy, Douglas wrote a book named “My Stroke of Luck,” in which he described how his life “changed for the better.”

In 2003, Douglas starred in the film “It Runs in the Family,” along with his son, Michael Douglas, Michael’s son, Cameron, and his first wife Diana Dill.

His last big role was in 2009’s “Before I Forget,” a one-man autobiographical show he performed four times in Culver City, Calif. The performances were compiled into a documentary that was released in 2010.

Kirk Douglas is survived by his second wife Anne Douglas, whom he married in 1954, his three sons and many grandchildren. His fourth son, Eric Douglas passed away in 2004.

In December of 2019, Kirk became 103 years of age. What made his last birthday uniquely special was the announcement that his son Michael had received a Golden Globe nomination for his role in “The Kominsky Method.”

Michael shared a photo to wish his dad a happy birthday and thanked the Hollywood Foreign Press Association “for making my Dad proud.”

12.9.2019 what a great day! Thank you to the HFPA for the Golden Globes nomination, and for making my Dad proud on his 103rd birthday! The Kominsky Method

Farewell Kirk! The world loves you. You will be fondly remembered.

What are your thoughts on this legendary icon of cinema? Let us know by joining the conversation in the comments and please share this article if you wish to pay tribute to Kirk’s life.

Date yourself! It’s wonderful! Here’s why you need to start loving your gorgeous self.