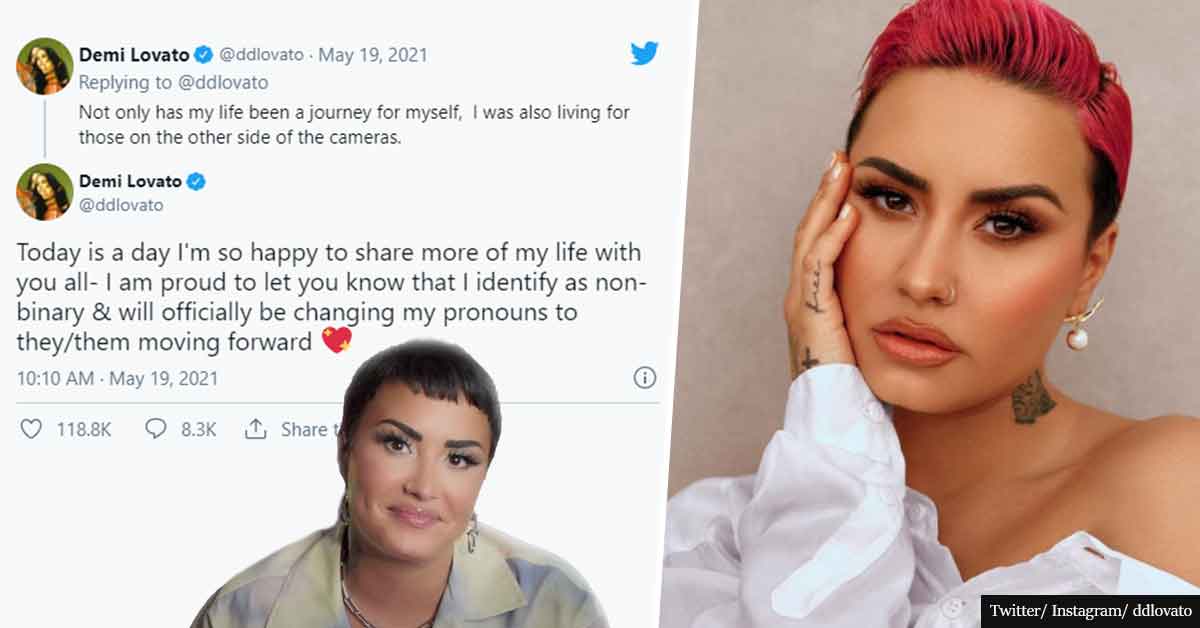 Popstar Demi Lovato recently made an announcement saying she now identifies as “nonbinary” and is changing her pronouns to “they/them”.

In the video the 28-year-old shared on the web, she said her new pronouns “best represents the fluidity I feel in my gender expression and allows me to feel most authentic and true to the person I both know I am and still am discovering.”

Lovato added that she recently “came into my truth,” and will keep on sharing new details with her followers.

“Today is a day I’m so happy to share more of my life with you all- I am proud to let you know that I identify as non-binary & will officially be changing my pronouns to they/them moving forward.”

“This has come after a lot of healing & self-reflective work. I’m still learning & coming into myself, & I don’t claim to be an expert or a spokesperson. Sharing this with you now opens another level of vulnerability for me,” she added. “I’m doing this for those out there that haven’t been able to share who they truly are with their loved ones. Please keep living in your truths & know I am sending so much love your way xox.”

Back in March, she announced that she is “sexually fluid” and “pansexual,” which means she is attracted to “anything, really.”

“I’m so fluid now, and a part of the reason why I am so fluid is because I was, like, super closeted off,” Lovato said.

“Yeah, anything, really,” she replied.

.@ddlovato has a lot to celebrate today: The success of her YouTube documentary series, the impending release of her new album, and now, her official coming out. 🌈https://t.co/hjLJzRaGCb

During the chat, she also talked about the importance of speaking one’s “truth.”

“I’m done living other people’s truths,” Lovato said. “I’m here to tell you that I’m going to live mine no matter what you think of it because it feels right to me.”

I’m doing this for those out there that haven’t been able to share who they truly are with their loved ones. Please keep living in your truths & know I am sending so much love your way xox

Previously, the singer has said that she is ashamed to be white and categorized gender reveal parties as “transphobic.”

“It’s both insincere and incorrect to pretend that gender reveal parties are not transphobic. You can’t have your proverbial pink-blue binary cake and eat it too. This is not about political correctness, it’s just…correct. We condemn gender reveals not because of our identity, but because of reality.”

“Transphobia is not just about prejudice against individual trans people, it’s also a way of thinking that understands non-trans people as more natural/organic and erases everyone else,” she added. “These ideas, like the gender binary, fuel mistreatment of all people, but especially trans and gender non-conforming people.”

For Conservative commentator Matt Walsh’s hilarious take on the story, please click below.

What are your thoughts on the gender ideology issue? Let us know by joining the conversation in the comments and please share this article if you’ve found it of value.

You can now buy a Hanging Egg Chair for your Cat

Billy Porter Reveals He Has Been HIV-Positive for 14 Years