Ultraviolet light shows the true effects of peeing while standing

The ability to pee while standing is perhaps one of the greatest things about being a man. And while it might seem like its nothing special, it really is a gift because it gives life a sense of unprecedented freedom.

Sadly, just like all else that seems too good to be true, it does have its downsides, as evidenced by a recent UV light experiment.

A company called QS Supplies decided to find out whether it is enough for men to only be lifting the seat while peeing, and here is what they considered:

“Much of water closet controversy comes from women’s exasperation at men when they sometimes leave the seat up. But here’s an arguably more fundamental question to consider – should men ever lift the seat to allow for standing urination, or should the toilet strictly be something we sit on, not aim at?”

They found that the way men urinate raises some concerns about splashback.

“Every time a man pees into a toilet bowl while standing, thousands of droplets, most of which are small and can’t be easily spotted, bounce and fly around the bowl onto the underside of the seat (if it’s up) and even further afield,” their website explains.

After spending six weeks recording and measuring the effects of splashback they came out with some disturbing findings.

They discovered that around 30% of men urinate on the back of the dunny because they believe it will minimize the splashback. But, as it turns out, that’s the worst spot.

In the end, they found that by the time you’ve visited the toilet to pee 10 times, you’ve pretty much covered the whole toilet, the nearby floor and other close proximity surfaces with urine.

While it may be considered unmanly to pee while sitting (and almost impossible under certain circumstances), it is definitely the cleaner option. 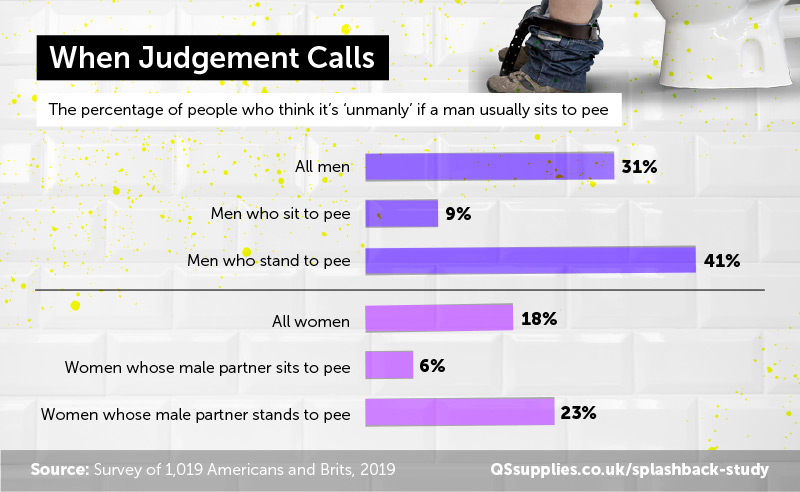 And here’s the video showing the actual effects of peeing while standing:

What are your thoughts on the matter? Let us know in the comment section below.