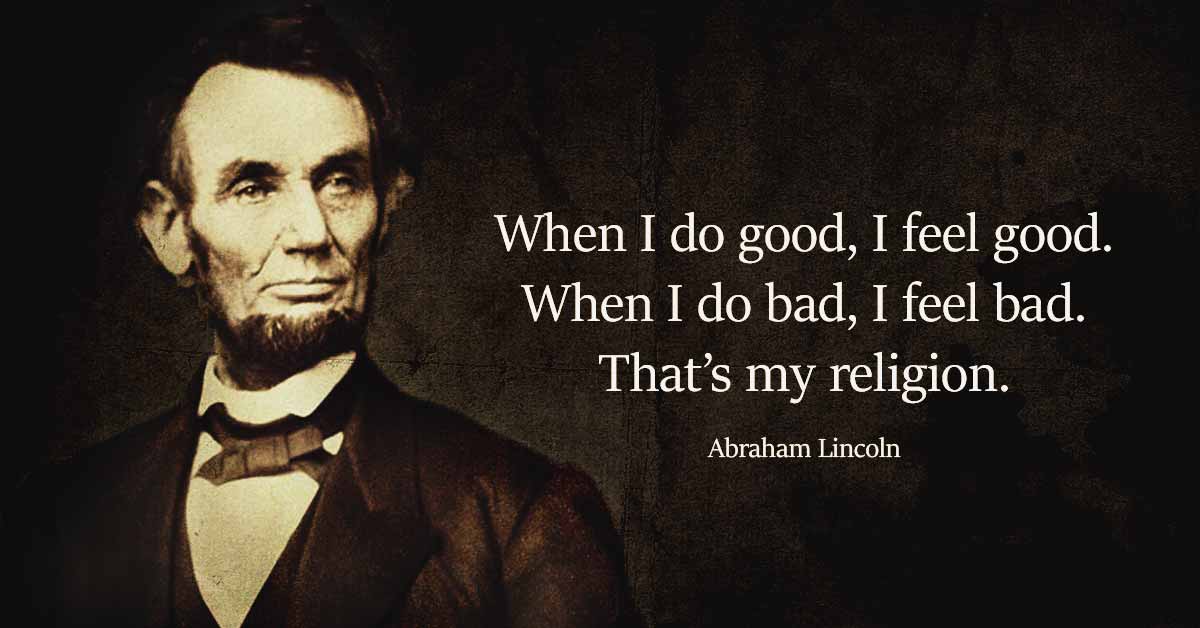 One of America’s greatest sons, Lincoln was a pious man of law and order. He remained fully devoted to America and the American people right until his tragic assassination on April 15th, 1865.

The beginning of his life was more than humble. Abraham Lincoln came to this world on February 12, 1809, as the second child of Thomas and Nancy Hanks Lincoln. The family inhabited a one-room log cabin on Sinking Spring Farm near Hodgenville, Kentucky.

At an early age, Lincoln discovered that the hard life of a farmer was not for him. He started reading avidly all sorts of books he could lay his hands on. As a teenager, Abraham was an obedient son, tall and strong for his age.

Of these, only the first born, Robert, lived to ripe old age and followed in his father’s footsteps to become a renowned and respected politician. He served as the 35th United States Secretary of War (March 5, 1881 – March 4, 1885) and as the United States Minister to the United Kingdom from May 25, 1889 to May 4, 1893.

On March 4, 1861, Abraham Lincoln was inaugurated as the 16th President of the United States.

During his term in office, he led his people through the Civil War, the costliest military conflict in the history of the U.S., and made major decisions on the Union’s strategy and tactical maneuvers.

Throughout his life, he fought for equal rights, liberty, and democracy. His political efforts led to the abolition of slavery and paved the way for the US economic boom in the following decades.

Abraham Lincoln was shot in the back of his head shortly after 10:00 p.m. on Good Friday, April 14, 1865, by by actor and Confederate sympathizer John Wilkes Booth. He died At 7:22 a.m. the following morning.

Switching to merrier times, Abraham Lincoln was also the one to declare Thanksgiving a national holiday in the USA.

That big turkey wouldn’t have had the same mouthwatering appeal without Thanksgiving, would it?

From a great man of significant accomplishments, who had a big and brave heart and a strong voice, here are 15 of Lincoln’s quotes to make you rediscover the profound goodness of God!

1. I’m a success today because I had a friend who believed in me and I didn’t have the heart to let him down. – Abraham Lincoln 2. Whatever you are, be a good one. – Abraham Lincoln 4. Nearly all men can stand adversity, but if you want to test a man’s character, give him power. – Abraham Lincoln 5. I am a slow walker, but I never walk back. – Abraham Lincoln 6. Those who look for the bad in people will surely find it. – Abraham Lincoln 7. Those who deny freedom to others, deserve it not for themselves. – Abraham Lincoln 8. Give me six hours to chop down a tree and I will spend the first four sharpening the axe. – Abraham Lincoln 9. He has a right to criticize, who has a heart to help. – Abraham Lincoln 10. My great concern is not whether you have failed, but whether you are content with your failure. – Abraham Lincoln 11. Character is like a tree and reputation its shadow. The shadow is what we think it is and the tree is the real thing. – Abraham Lincoln 12. The best way to predict your future is to create it. – Abraham Lincoln 14. Folks are usually about as happy as they make their minds up to be. – Abraham Lincoln 15. The best thing about the future is that it comes one day at a time. – Abraham Lincoln 6 Ways You Can Improve the Way You Do Video Conferences

12 Quotes on Life, Love and Being Exactly Who You Are, by The Musical Legend Johnny…